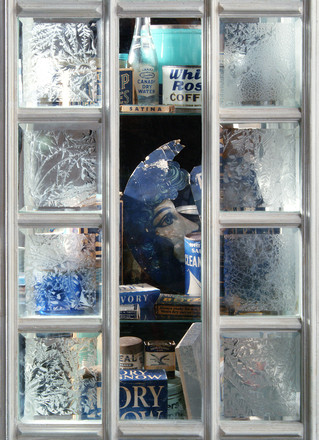 My work is a visual compilation of historical, theatrical, literary and cinematic markers that I’ve been informed by throughout my lifetime.  The idea of taking outdated elements from long shuttered warehouses, surplus yards and estates, giving them purpose and life anew fascinates me as it feeds my sense of the mystical reorganizing of reality. To tell a story with rescued objects that would ordinarily be cast out inspires their re-awakening into supernatural suggestions. My studio is not unlike Jean Cocteau’s surrealist castle in the 1946 film Beauty and the Beast or Jan Svankmajer’s Wonderland in his 1988 film Alice... the unexpected lives here.

I work in several different forms, both large and small scale sculptures as well as flat surfaces. My larger pieces are life-size jointed figures standing inside elaborate vitrines. Each one of these sculptures has a personality which echoes historical allusions and theatrical traditions. The relationship between the found components, this history and my imagination forms an alchemy that relies on the use of antique materials and laborious obsolete techniques to create liberated archetypes channeling theater, surrealism and folk art traditions. For example, Mr. Black aka “The Footman,” is made from hundreds of antique shoelaces ruched together into a lace armor, antique buttons from high button shoes and cast iron treadles from shoeshine boxes forming a sort of church spire atop the vitrine. I have been referred to as “a guild of one” due to the range of my skills. My intent is to create a “theater of the object”, to imbue conceptual art with a richness only possible when the history behind the concept, the value of the materials used and the human labor involved in the creation marry concept to object in such a way that a work of art can stand on it’s own as enchantment… beyond the idea it stands for.Artist/writer John Matturri has described Chris Piazza’s work as coming out of “her deep feeling for found materials, a feeling rooted in patinas that are as much emotional as physical, that often call the viewer back to material histories that resonate although they are often just beyond the reach of personal memory.” Matturri writes that Piazza’s works "combine a minimalist sensibility of repetition, seriality, and meticulous craftsmanship with a maximalist imaginative vision akin to, albeit on a larger physical scale, that of Joseph Cornell. Applying her procedures to found objects, she creates an art that celebrates the world of their makers and users not through nostalgic recollection for a lost past but through a positive affirmation of continuity and solidarity. Her re-use of those objects is very contemporary."

PBS on restoration of Gene Moore Chandelier for MCNY

For information or inquires about Chris Piazza's work, please contact: